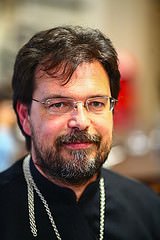 1993 - 1995: Graduate Certificate in Learning and Teaching. (University of Surrey, Guildford)

2009 – present: priest-in-charge in the Eucharistic community of Holy Trinity in Guildford.

2008 – 2015:  a member of the director board of the Institute for Orthodox Christian Studies (Cambridge, UK)

2011 – 2015: a delegate of the Archdiocese in the Theological committee of the Pan-Orthodox Assembly of Bishops for British Isles and Ireland.

More than 70 publication in physics including Nature journals.